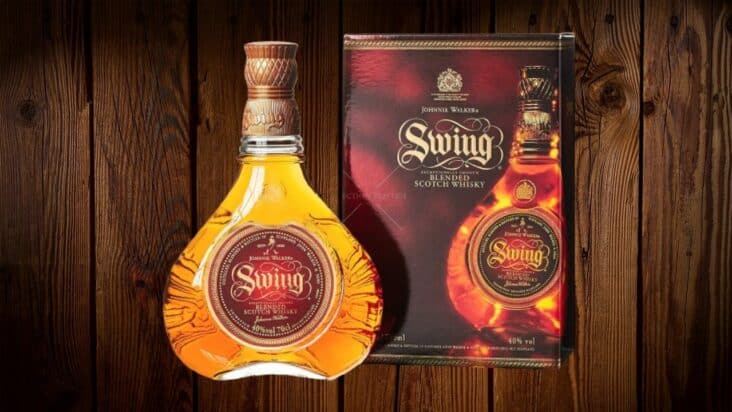 Johnnie Walker Swing is one of the scotch giant’s lesser-known blends. In fact, odds are that if you’ve seen a bottle of Swing, you may not have even realized it was a Johnnie Walker blend.

The bottle is instantly eye-catching, but you’re unlikely to find people who can talk about what it’s like inside.

In this review, we plan to do exactly that. We got ourselves a bottle and tested it out so we could get the inside scoop.

We looked at Swing in terms of its smell, taste, and finish, as well as how it pairs up against other whiskies in a similar price range.

Johnnie Walker Swing has been in production since 1932. Swing is the brainchild of the master blender and grandson of John Walker, Sir Alexander Walker.

The 30s are considered to be a Golden Age of whiskey. After the prohibition of the previous decade, the American demand for high-quality scotch skyrocketed.

Johnnie Walker Swing earns its name from its unique bottle. The tear-shaped decanter is curved on the bottom, so it “swings.” It was designed in this way so that the bottles would survive the turbulent voyage across the Atlantic.

The blend is made up of over 30 different grains and malts all originating from the Scottish Isles. There is no statement of age on the bottle, but a tasting reveals a fresh, lively scotch that’s typical of younger whiskies.

We did an in-depth tasting and review of Johnnie Walker Swing. This tasting was done neat, with a little splash of water to release the flavor.

Smells of vanilla and caramel are immediately noticeable. The prominent, perfume notes sit in the front of the nose, carried by subtle notes of smoke and malty nuttiness.

The whiskey reveals a subtle tartness.

You can tell just from the smell that Johnnie Swing is a sweeter whisky. The nose is layered, but it’s missing some of the tangy, spicy aromas that make for a truly complex nose.

After the first few sniffs, the notes of honey and caramel can become overwhelming. The initially welcomed sweetness starts to feel more like a whisky liqueur, like Southern Comfort, than a hard scotch.

The first thing you notice after taking a sip of Johnnie Walker Swing is the syrupy vanilla flavor. The sweetness detected on the nose carries through to the tasting. The sugar content makes for easy drinking, but veteran whisky drinkers might want something drier.

The middle palate is full of complex, deep flavors brought from the blend of grains and malts. The middle palate picks up on savory, nutty notes. There are hints of almonds and barley: unmistakable markers of Scottish grains.

There is a unique sense of woodiness in the bottle. Not the deep, ashy flavors that are common in whisky, but a lighter, more refreshing approach. The flavor is more like a young sapling than a giant oak.

Swing doesn’t have the typical spiciness that is found in single malts. There is a slight burn at the back of the throat from the alcohol, but it lacks the tang of bolder whiskies.

Johnnie Walker Swing comes into its element in the finish. It’s a decidedly light and refreshing beverage, and the finish confirms that.

Swing is of medium oiliness. This means that the flavors linger on the tongue after swallowing, but not so long as to become astringent.

The sweetness of the drink coats the mouth, which soothes some of the stronger elements. It’s good for drinking on those sunny afternoons, but it can wash away some of the more intriguing flavors.

At the back of the mouth are welcome notes of smoke that keep you coming back for more.

As the last of the drink dissipates, there are vanishing hints of honey and vanilla that draw it full-circle with the first notes on the nose.

This is the first hurdle over which Johnnie Walker Swing truly falls. Firstly, getting your hands on a bottle of Swing can prove a challenging task. Most often, you will only find bottles in stock at airport duty-free stores.

A bottle of Swing in the real, tax-paying world will cost you around $60. That’s a lot to ask for such a simple drink.

There are some serious heavy-hitters in that price range, including some limited-edition Nikka single malt Japanese whisky.

The price progression for Johnnie Walker colors is as follows:

A bottle of Swing certainly demands attention. Its interesting shape and unique history make it a remarkable drink in its own right. Unfortunately, the finished product is lacking.

It’s far from unpleasant, but it’s missing the depth and complexity that you would expect for a $60 bottle of scotch.

Diehard Johnnie Walker fans would get something out of the rarity. Ultimately, Swing is best left for collectors to leave on their shelves. 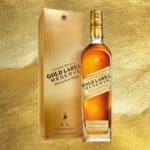 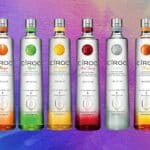