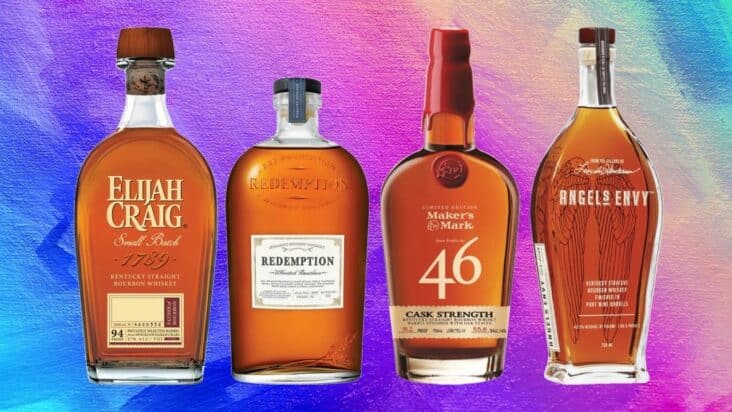 The best sipping bourbon can be difficult to establish, with so many options on the market.

Bourbon is considered a good starting point for those looking to enter the world of whiskey. It is made using a mixture of grains (or mash) to distill the product and contains a minimum of 51% corn.

Additionally, the grain mixture has to be no more than 160 proof and stored in charred new oak barrels.

We’ve sipped our way through the best of the best to put together our review of the top sipping bourbons on the market today.

Angel’s Envy is made in small batches, using between 8 and 12 barrels simultaneously. It is aged up to 6 years. During this process, about 5% of the spirit is lost each year to evaporation which the brand refers to as the ‘Angel’s Share’. What remains is what is bottled up – the ‘Angel’s Envy’.

Then, in an unusual twist, it is finished in 60-gallon French Oak ruby port barrels, imported from Portugal, for another 3 to 6 months. This adds flavor-enhancing complexities to the bourbon.

Angel’s Envy Port Cask has a gold appearance, with slight amber hues. The aroma is sweet and syrupy, with strong notes of vanilla, nuts, citrus, and a subtle hint of mint.

The taste is smokey on the palate, with notes of vanilla, peppercorn, and citrus, all following through from the aroma.

After a while, hints of brown sugar, cherry, and mint appear in the flavor. It has a very light mouthfeel, which makes it slightly more difficult to make out the flavors.

The finish is smooth and silky, and hints of oak, spice, and mint linger for a while afterward.

The Angel’s Envy Bourbon is priced at about $50.

To craft the Small Batch Select Bourbon, Four Roses Master Distiller Brent Elliott selected and experimented with six of the brand’s Bourbon recipes, each aged a minimum of 6 years, to create the blend.

According to the brand, Four Roses is the only known Bourbon Distillery that combines five proprietary yeast strains with two separate mash bills to craft their signature bourbon recipes.

Four Roses Small Batch Select Bourbon has a strong amber appearance. There are subtle notes on the nose of rich fruits, winter spices (cloves and cinnamon), caramel, and honey, with subtle hints of flowers and oak.

The bourbon is creamy on the palate, with sweet flavors of berries, honey, and caramel, and spicy flavors of rye, oak, and peppercorn. The finish is lengthy, with the creaminess persisting on the tongue, and notes of caramel, vanilla, and spice.

Four Roses Small Batch Select Bourbon is priced at around $40.

W.L. Weller is a brand under the umbrella of Sazerac and distilled at their Buffalo Trace Distillery. The 12 Year Old is, according to the brand, aged for longer than most of the other wheat bourbons on the market.

Notoriously hard to find, this bourbon has been compared to the exclusive, and elusive, Pappy van Winkle bourbon, with many a bourbon aficionado referring to it as its ‘cousin’.

The W.L. Weller 12-Year-Old has a warm amber appearance. The aroma is rich and full, with heavy notes of caramel, candied nuts, and vanilla hitting the nose immediately. This is followed by whiffs of leather, citrus, cinnamon, and wood.

The distinct rich aromas transfer well to the palate, with a subtle sweetness. Notes of leather, vanilla, fruits, mint, and caramel come through in a complex combination.

The finish is long and pleasant, with a warm, spicy aftertaste of oak, vanilla, and cinnamon.

With this bourbon being extremely rare and a hot item among resellers, prices can vary from anywhere between $300 to $500.

Distilled by Heaven Hill Distillery in Kentucky, the Bernheim Original is aged for 7 years. The Heaven Hill master distiller selects less than 100 barrels from chosen middle floor locations in the traditional rickhouses that have matured enough to fit their standards.

These barrels are then mingled in ‘small batches’, hence the ‘small batch’ designation to the bourbon.

For a long time now, many bourbon-makers have used wheat in the mash bills, but Bernheim boasts being one of the first bourbons to use the winter wheat as a majority grain in its mash bill, during the distilling process.

The Bernheim Original 07 Year Old Bourbon is a strong caramel color in appearance. The aroma is rich and sweet, with toffee and caramel notes up-front, followed by cherry, orange, cinnamon, and nutmeg. There are hints of chocolate, roasted almonds, and coffee.

The bourbon is thick on the palate, with the sweetness of caramel, cherry, brown sugar, and vanilla driving the taste. The undertones are citrus, cinnamon, nutmeg, and charred oak.

The finish is medium-long, with a nutty, woody lingering flavor, and a very slight hint of bitterness.

This bourbon retails at around $35.

This Wheated Bourbon is from Redemption, a brand that buys its whiskies from Midwest Grain Products (MGP). The bourbon is aged for four years and is made using 45% winter wheat in a mash bill (the average industry standard is 20%), which produces a special and nuanced flavor.

The Redemption Wheated Bourbon has a light, honey appearance. The aroma is light and pleasant, with sweet notes of fruit, cocoa, caramel, and vanilla.

The bourbon is light and watery, with a slight heat. The taste is sweet with flavors of vanilla, caramel, fruit vanilla. The subtle heat from peppercorns, that lingers into the finish.

The finish is long and heated, with the peppercorns reluctant to let go of the palate.

The Redemption Wheated bourbon will cost you around $45.

The bourbon was released in 2010, and being the first new product created at the distillery since its original bourbon in 1953, and the first of its wood-finishing series, it marked a new era for the brand.

It has a longer aging process, with seared French oak staves added at cask strength later for a bolder, smoother taste, sans the bittern flavor that can often result from additional aging.

The Maker’s Mark 46 is coppered with amber in appearance. The smell is rich and sweet, with notes of fruit, hazelnut, honey, and undertones of spices and oak.

The taste is smooth and rich, with sweet notes of butterscotch and vanilla. This is made complex with spice, lemon, rye, and malt.

The finish is sweet and lingering with notes of, butterscotch vanilla and oak spice.

The bourbon will set you back about $40.

The Elijah Craig signature Small Batch Bourbon, made in Heaven Hill Distillery (also home to the previously listed Bernheim) uses level 3 charred oak barrels to obtain a smoky flavor and spicy undertone. It is made up of selected whiskeys aged between 8 to 12 years.

The brand has a fascinating pioneering history. Baptist preacher, educator, and entrepreneur Reverend Elijah Craig was a man of many talents – he built the first paper and wool mills in Georgetown. But distilling was his standout ability, and it was to thank for bourbon as we know it today.

Elijah Craig became the very first distiller to age whiskey in new charred oak barrels, in 1789. This continued, with Elijah working to perfect this process of distilling, and ever since he has been known as the Father of Bourbon. The brand prides itself on keeping these trusted methods alive in its distilling processes today.

The bourbon is an unusual dark ember color. On the nose, the bourbon has an immediate vanilla and caramel whiff that is subtle at first and intensifies with time. There are very subtle hints of honeycomb and cardamon.

Vanilla, caramel, and oak are distinct on the palate, with light undertones of cherry, cinnamon, oak, and citrus. Overall, the taste is incredibly subtle,

The finish is long, and spiced with cinnamon and nutmeg, with notes of vanilla, coffee, and mint.

The Elijah Craig Small Batch Bourbon will cost you about $22, making it the most affordable bourbon offering on the list.

Redwood Empire’s Pipe Dream Bourbon is distilled in the Russian River Valley wine region. The bourbon is named after the 14th tallest tree in the world and is Redwood Empire’s first Bourbon whiskey.

The bourbon is made from barrels that are aged between four and twelve years, with a 75% corn mash bill.

Redwood Empire has incorporated sustainability into every area of its operations. This includes the distillery being built to distill in a single pass, saving water and energy, and farmers in their locality being able to use their mash as livestock feed.

Most notably, Redwood Empire plants a tree for every bottle sold. Saving the planet by drinking bourbon? Sold.

The bourbon is a deep golden hue. The aroma is strong, with sweet vanilla, honey, orange, and maple.

The flavors are rich and complex, with corn, grape, vanilla, pecans, and woody notes. It is medium-thick on the palate.

The finish is pleasant and smooth. Hints of orange and spice at first, followed by a long black pepper heat in the throat.

The Redwood Empire Pipe Dream Bourbon will set you back between $35-$40.

Is bourbon smoother than whiskey?

Bourbon is generally considered to be smoother than whiskey, and a good starting point for beginners leading up to drinking whiskey. For inexperienced whiskey drinkers, whiskey can be strong on the palate.

Is Jack Daniels a Bourbon?

No, Jack Daniel’s whiskey is dripped through 10ft of packed hard sugar maple charcoal and finished/matured in new charred oak barrels. This process and the ingredients make it distinctly different from bourbon.

Is Southern Comfort a whiskey or a bourbon?

It is neither. Southern Comfort was invented in 1874 by Martin Wilkes Heron, who originally blended whiskey with fruits and spices to a sweet flavor and a smooth liquid. Because of these infusions, Southern Comfort is technically considered to be a liqueur.

This is subjective to the individual palate, but Angel’s Envy Bourbon often tops the list of the smoothest bourbon. For a pricier option that’s also best for sipping, try Blanton’s Bourbon. 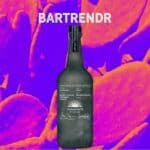 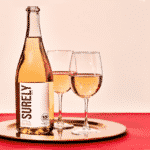