Balcones Baby Blue Whiskey is one of the most unique whiskeys out there in the market.

With that being said, you might wonder if it is worth buying this whiskey since it will most definitely pinch your pocket.

In this review, we will discuss aspects of Balcones Baby Blue Whiskey in detail. These aspects will include the appearance, aroma, taste, finish, and price.

This classic Texas liquor brand, founded by Chip Tate and Jared Himstedt, has become one of the most well-known craft distilleries in Texas.

Balcones is committed to keeping its bottling process in Texas – a commitment that some liquor companies do not do. This can be seen for all of its spirits, such as Balcones Single Malt.

Blue corn is a type of corn that was developed by the Hopi Native Americans. The blue corn gives the whiskey a unique taste that many whiskey drinkers are not accustomed to.

Depending on the location to which this whiskey is being exported, it has a bottling strength of 46% ABV.

This whiskey is also not a bourbon as it is not matured in fresh oak casks – a standard requirement for bourbon.

Instead, this whiskey is made from ex-bourbon casks and aged for at least six months in oak barrels.

The drink’s color is a deep, golden caramel, almost like beer, but without the fizz.

On the nose, you will immediately smell the vanilla bean that has a savory note to it.

Following the vanilla, you will also smell the following: creamy donut, biscuit mix, cake paced spirit, baked banana, light oak, and a hint of rosemary. On the surface, this may not be particularly flattering tasting notes for some.

You might also notice an aroma that you can’t quite put your finger on – and that may be the blue corn.

On your first sip, there is an initial spirit note from the ethanol.

Taste-wise, you might prefer to add a bit of water to the whiskey to diminish the whiskey’s intensity. This will allow you to appreciate all the flavors a lot more.

One thing to note is that some drinkers find the taste to have hints of tequila.

However, if you enjoy the taste profile of wheated bourbons, then you should take a pass on this whiskey.

After that tasteful experience, there is a swift, spicy, and sweet conclusion that contains somewhat of a burn.

There are some hints of lemongrass, jasmine tea, and lemongrass.

Quite mature whiskey drinkers will get the impression that this whiskey has not been matured in fresh oak casks. This owes to the fact that Baby Blue has been thoroughly prepared in ex-bourbon casks, and thus, there is minimal oak involvement.

The over consensus for various whiskey drinkers is that the result leads to a fascinating experience.

The retail price for a bottle of Baby Blue in America is around $40 to $45.

Some whiskey drinkers might find the price to be quite hefty for such a young whiskey.

American spirits are not everyone’s favorite type of whiskey.

The question that many people will ask is whether one should pay such a premium price for a young whiskey when one can buy a more mature Scotch whisky. This may depend completely on one’s personal choice.

It may depend on the budget you have and whether you would like to be adventurous to try this whiskey’s distinct flavor.

It is important to consider that older is not always better, but rather the quality of the cask. Do not let the idea of younger whiskey put you off from trying this whiskey because you might just enjoy the experience of consuming this whiskey.

There are not many competitors in the corn whiskey world, but this drink is a favorite of many people out there due to its distinct taste profile.

This whiskey may not spend a lot of time in an oak barrel, but it will come in handy for a unique sharing experience at the bar with others.

If you fancy a taste of Texas and want to change it up a bit, Balcones Baby Blue Whiskey might just be worthwhile.

What is the difference between Balcones Baby Blue versus Balcones True Blue?

Balcones True Blue Whiskey has some added sweetness, but with an added element of dark chocolate. The finish is also quite long compared to Baby Blue’s disappointing quick finish.

The True Blue has also spent more time in the barrel compared to the Baby Blue, and this results in the lack of corn that you might find in the Baby Blue.

What is the difference between blue corn and yellow corn?

On the other hand, Blue corn is scarcely used in American corn-based alcohol. Blue corn has a sweet, nutty taste with more protein than yellow corn.

Balcones Baby Blue has won an array of awards, such as the “Master Award” by the American Whisky Masters, the “Most Underrated Whisky” by the Drammie Awards, and the 2018 winner of the Good Food Awards. 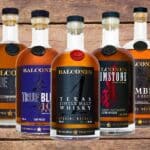