Blanton’s has every reason to be proud of their Original Single Bourbon.

This iconic brand innovatively introduced single-barrel bourbon to the world. Forever transforming the industry by creating this “Super Premium” category of bourbon. At the time this was ground-breaking in the industry and left people questioning what the true taste of bourbon is.

Blanton’s Original Single Bourbon sells for approximately $70 per 750ml bottle and it can be bought online or in stores. However, do check availability before driving there as it is known to be quite scarce.

The brand is marketed as a premium brand and being naturally in the single-barreled category, it automatically costs more than the blends.

Let’s have a closer look at this authentic bourbon.

Mr. Elmer T. Lee became the Master Distiller at Buffalotrace, and he lived and breathed this role for many years. Just a year before his retirement he was tasked to create superior-high-quality bourbon.

He did just that and called it Blanton’s Original Single Barrel Bourbon.

A single barrel bourbon is barrel-aged for each bottling batch. It is not mixed with whiskey from any of the other barrels.

Blanton chose barrels from the middle sections of warehouse H to share with important people like diplomats and VIPs. Thankfully today, everyone has access to Blanton’s Original Single Barrel Bourbon.

Unfortunately, Blanton passed away in 1959 so he never got the opportunity to see and taste the bourbon honoring his existence.

Apart from supporting the locals by sourcing water from them, the bulk of the water used is from the Kentucky River. The river water is a contributing factor to the taste of the bourbon as the bed of limestone which lies beneath adds nutrients to the water. Nutrients like magnesium and calcium which the yeast needs to flourish.

Lastly, the yeast is added and left to ferment for about 3-5 days. When the mash is around 7.5% alcohol it is then ready to be distilled.

Once the mash goes into the still, it then needs steam. The steam causes the alcohol to vaporize and condense into 120 proof grain alcohol.

Grain alcohol is then distilled again for the second time in a continuous pot still called a doubler, all the way up to 135 proof. And the result is a clear whiskey. Now the whiskey is ready for barrel aging, it gets processed until the legal 125 proof and finally enters the barrel.

Barrels play a very important role in the making of bourbon. Number 4 char is used on barrels as it interacts with the oak and captures a rich flavor. Then lay to mature in the notorious warehouse H.

In the hot months, the whiskey goes into the oak and in the winter season it draws out. Blanton’s is selected by taste not age by the Master distiller and has to pass a panel.

Barrels are dumped by hand. No machinery is used and then it goes through a chill filter to remove unwanted particles.

Blanton’s is bottled, sealed, and labeled by hand one by one.

The stopper is equivalent to the saying “the cherry on top”. It just rounds off this package so beautifully.

It symbolizes the Kentucky tradition of horse riding. There are eight collectible stoppers. Each has a letter to spell out Blanton’s and the rider of each letter has a different riding position.

When doing bourbon tasting, key factors to consider would be the appearance, the smell, taste, and the experience it leaves behind.

With this particular review, we would expect a solid performance from this authentic American Bourbon.

On the nose, we will be observing the intensity of the oak aroma.

And on the palate, the maturity of the bourbon will be delivered through the years being absorbed in and out of the oak barrels.

The finish refers to the impression left after the tasting. That being was the experience pleasant, or harsh.

When poured, it is a glass of liquid gold beauty. The color is close to caramel and comes from aging in the barrels for 6-8yrs.

Blanton’s Original Single Bourbon is gentle on the nose. Primary notes of honey sweetness and vanilla take the lead. Dessert heavy with some caramel and butterscotch picked up in there.

Also coming through are some notes of light spice, cloves and nutmeg, and definitely cinnamon. The citrus peel is there, but faint, characteristic of the rye grain.

A smell of bourbon lingers in the air.

The first sip is surprisingly not as sweet as expected by the smell. Not overbearing at all, good balance.

On the second sip, we experience dessert flavors that are slightly sweet with notes of citrus and oak. Still quite mellow which is great for first-time bourbon drinkers.

The flavor is not bad at all, the usual vanilla coming in, delicious caramel, and some char from the barrel. This is a “high rye” mash bill bourbon giving it that extra boost of spice and depth.

The flavor ends on a smoky spice note.

As the sweetness subsides, wisps of oaky smoke drift up from the throat satisfying your mouth with warmth.

Not aggressive and easy-going with a short finish. Blanton’s Original single barrel is bottled at 93 proof, 46.5% alcohol by volume. Pleasant neat or with ice, there’s a good amount of heat.

Bourbon is typically viewed for the more senior drinkers as it is usually bold and lights you on fire. But not Blanton’s Original Single barrel. It is well balanced which allows it to be composed and pleasurable enough for all to enjoy.

This classic American Bourbon is as authentic as you can get. This is what good classic bourbon should taste like. Along with Blanton’s Straight from the Barrel and Blanton’s Special Reserve bourbon, their Original Single barrel whiskey is truly one-of-a-kind.

It may be hard to find, but you most certainly will not be disappointed, but an absolute must-have in your bar! Not only to enjoy the drink but also to show off with a collection of all eight stoppers. 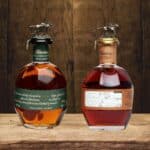 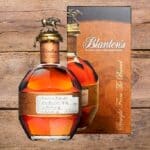