Crafting whiskey is serious business. Whiskey drinkers are an elite group of individuals who take their whiskey just as seriously as the process needed to create these fine beverages.

Rye whiskey and bourbon are two of the more popular whiskies available. In the USA, the whiskey of choice is Bourbon while Rye is more popular around the world.

Regularly compared, these whiskeys are somewhat similar but differ in their flavor and intensity. They both create some delicious cocktails but are typically enjoyed on the rocks.

We investigate to see how Rye Whiskey and Bourbon compare and go over a few of their differences.

How Whiskey is Made

The process of making whiskey involves fermenting a distilled grain mash. The mash is made using a combination of malt and other grains, this mash combination is called a ‘mash bill’.

Water is then added and heat is applied to the mixture. The sugars created from this process are then fermented to create alcohol.

Distillation is to follow. This involves selective evaporation of certain parts of the liquid. Upon completion of this step, the liquid is then stored in barrels to commence with the aging process.

Different types of whiskey are created depending on the grains used, the distillation process, the type of cask it is placed in, and for how long the whiskey is aged.

The different grains used in this process give the rye and bourbon their distinctly different flavors. Rye is a more spicy, dry flavor that seasoned whiskey drinkers might prefer. The corn mash used in bourbon gives it a sweet, full-bodied taste.

Both Rye and Bourbon are aged for 2 years in charred new oak barrels. When these whiskeys are barrelled they should be no more than 62.5% Alcohol by Volume (ABV). Bottling is anywhere between 40 – 80% ABV.

Unlike other whiskey types such as scotch or Irish Whiskey, there is no age requirement for bourbon. However, it has to be aged for at least two years to claim the name ‘straight bourbon’. The same is said for Rye Whiskey.

Bourbon is unique to America. It is the only country allowed to distill bourbon and it is only called bourbon when produced in the United States.

Rye whiskey is not regulated and can be distilled anywhere around the world. No set standards are available that govern the crafting of rye whiskey, hence the variations in taste and flavor.

Whiskey variations are manufactured by creatively adjusting the above specifications. Different flavor and taste types abound which will satisfy even the pickiest whiskey connoisseur. Bourbon is somewhat of a unique drink, which might be best saved for a special occasion. Although manufactured in America, some of the rare offerings can only be found in certain states.

Kentucky’s famous Heaven Hill Green Label for example is very affordable but it is only available in this state. The taste of this bourbon makes it well worth the drive to purchase this little gem.

It has a unique cloudy appearance that is not similar to other variations of alcohol. Bourbon has a large flavor profile and a delicious, strong aroma. Sometimes consumed in cocktails, it is mostly served on the rocks. Due to its sweet flavor, it’s an easier drink than rye whiskey.

Some traditional bourbon drinks include the well-known cocktails Old Fashioned and Manhattan, but this sweet whiskey is also used in the classic Hot Toddy.

There a few different types of bourbon, listed below. They differ based on their location and mash bill. Budget-friendly and easily available, even some of the cheapest bottles of rye whiskey will still be a good drink.

Rye has a spicy undertone that creates a more dry taste than bourbon. As the rye ages, the flavors become more subtle without losing intensity.

America follows guiding standards to ensure that the quality of the product is not compromised and that each bottle has the same consistent flavor, similar to their standards for bourbon. However, these standards are not followed in Canada.

Rye whiskey is made from 51% rye, with the rest of the mixture typically including corn and barley. However, you could find rye whiskey with 95-100% rye.

What some whiskey drinkers may not know is that rye whiskey can have a few health benefits. With that said, drinking bottles a night definitely won’t have the same positive effects. For one, it has very low calories, possibly the lowest of any alcoholic drink and it is safe to consume for diabetics.

It can also assist in digestion and have a positive effect on your heart health. Rye decreases blood pressure and is said to reduce the risk of cancer. This is due to the ellagic acid in the rye which aids in keeping DNA away from cancer-causing cells. Like everything in life, this is only in moderation.

There are two types of rye, American rye and Canadian rye.

Is Jack Daniel’s Bourbon or Rye?

Jack Daniel’s is Tennessee Whiskey and not a bourbon. The Old No 7 is manufactured only in Lynchburg, Tennessee.

According to the regulatory criteria, Jack Daniels can be called straight bourbon. But the company prefers to just label it as a Tennessee Whiskey.

Why is Jack Daniels not a Bourbon?

The charcoal mellowing process in Jack Daniels is the significant feature that gives it that rare smoothness. This is achieved by slowly dripping (drop-by-drop) the whiskey through over ten feet of charcoal before barrelling commences.

It is not considered bourbon. The mash bill used to create these two whiskeys differ and they have distinctly different flavors because of this.

While similar, we can see how these two whiskeys differ. If you’re looking for something sweet, then Bourbon will be more suited for you. The spiciness of rye whiskey will be more suitable to the seasoned whiskey drinker.

Both work well in cocktails but are mostly drunk on the rocks. There is something to be said about a rye whiskey on the rocks for a night of good long conversation.

With all that being said, it really comes down to personal preference. 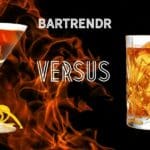